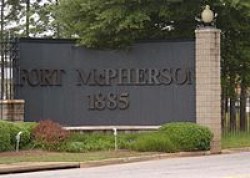 Founded in 1885 and closed in 2011 under the Base Realignment and Closure Act of 2005, Fort McPherson was used as an internment camp for German POWs during World War I.  It also housed a base hospital, General Hospital No. 6; and was the site of an officers' training camp.  Immediately to the west of the post, across Campbellton Road, a war prison barracks was established to confine German POWs. The prison camp reached a peak population of 1,411 in July 1918.  The secretary of war directed that the permanent barracks of Fort McPherson be made available for general or base hospital use June 23, 1917. The command of the post was turned over to the ranking medical officer and Fort McPherson transformed itself into a general hospital with a capacity of nearly 2,400 beds. It is estimated that more than 10,000 patients were admitted from August 1917 until December 1918.