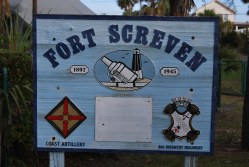 In 1786, the Georgia Legislature approved the creation of a fort on Cockspur or Tybee Island, to be named in honor of Revolutionary War hero General James Screven. The fort was never built by the state, but in 1808 the property fell under the jurisdiction of the Federal government as the Fort Screven Reservation.

In 1855, the government approved building Fort Screven on the north end of Tybee to provide modern coastal defense. Six poured-concrete, low-profile gun batteries (named for war heroes) and a minefield were ordered for Tybee along with hundreds of other military buildings. From 1897 to 1947 the fort was an integral part of America’s Coastal Defense system. Troops stood guard on Tybee through the Spanish American War of 1898, World War I and World War II. The Fort was closed in 1947 and sold to the City of Tybee and tourism returned as a major part of Tybee’s history. By the 1950s many of the fort’s buildings had been converted for use by private owners.

In 1961, Battery Garland, the former gun battery and magazine for a 12-inch long-range gun, became the Tybee Island museum. A room that once stored six hundred pound projectiles and two hundred pound bags of gun powder, now holds the collections and exhibits of more than 400 years of Tybee Island history.  It is the location of the only shot fired in anger in Georgia during World War I.

Today, the abandoned and silent concrete bunkers stand side-by-side with fine beachside homes. Visitors marvel at the private residences nestled atop the fort’s walls, the magnificent ocean and river views and the fort that played a role in so many phases of American history.