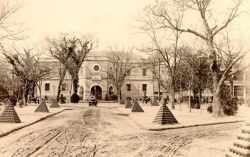 Relocated in 1827-28 from an earlier site along the Savannah River, the Augusta Arsenal served as a military armament supply and training center for the U.S. military, and briefly for the Confederate armies, until its closure in the mid-1950s.  During World War I, the Arsenal became a center for the repair of small arms and rifles.  After 1918, only a small force was stationed at the Arsenal.  After closure, it first was transferred to the Richmond County Board of Education, but later became the site of Augusta State College, which today is part of Augusta University.  The old Arsenal buildings remain in place as administration buildings for the campus.  A museum is in the former guardhouse of the Arsenal, at Walton Way and Katherine Street, Augusta.  An official state historical marker is at the site.