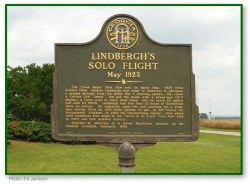 Building on the rapid development of aviation during World War I, the U.S. Army in 1918 constructed Souther Field as a primary flight-training facility.  It was built just northeast of Americus in a former peach orchard purchased by Sumter County and deeded to the federal government.  At the height of its World War I activities, Souther had 147 planes and about 1,500 service personnel.  Deactivated following World War I in April 1923, its planes were sold off to the highest bidders.  Charles Lindbergh bought his first airplane as part of that auction, stayed for flight training, and completed his first solo flight at Souther within three weeks of his purchase.  A seven-foot statue of Lindbergh is displayed at the site.  Souther was reactivated during World War II to train aviation cadets of the U.S. Army Air Force and the British Royal Air Force.  Today, Souther Field has become the Jimmy Carter Regional Airport, and some of the original buildings still stand as part of South Georgia Technical College.  A state historical marker at the site recounts Lindbergh’s first solo flight.