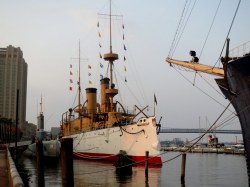 The Olympia carried the U.S. Unknown Soldier from WW1 back from France.  Olympia was Admiral Dewey's flagship at the Battle of Manila Bay in May, 1898.   Moored along the Delaware River at Penn's Landing at the foot of Spruce Street alongside the WW2 submarine Becuna, launched 1944.

There is an admission charge to go on board and tour the ship.  However, you can see  the ship without charge from the Penn's Landing walkway along the river, reached via the public streets and sidewalks.   You can reach the Olympia at Penn's Landing via Columbus Blvd. or the Spruce St. or Dock St. walkways.

Independence Seaport Museum is open daily from 10 a.m. to 5 p.m.  The Museum will be CLOSED every Monday from January 9 - March 2017 with the exception of holidays.

Between Memorial Day and Labor Day the Historic Ships will be open until 7 p.m. on Thursdays, Fridays and Saturdays