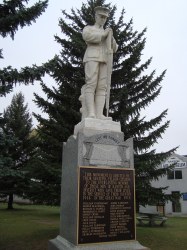 Highway #2 (southbound) at 17th Street
Nanton
Canada
T0L 1R0
http://www.bombercommandmuseum.ca/cenotaph.html
In 1926 Albert J. Hart was commissioned to create a memorial to honour the memory of those Nanton and District citizens who were killed in action during World War I. The 6.5' high statue is of Carara Italian marble and features a soldier at rest, with arms reversed in the position that would have been assumed at the burial of a comrade.

Detecting your location...
No information to be displayed !
Bronze
Marble
Albert J. Hart