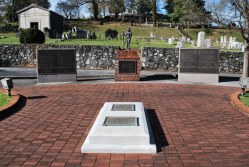 A beautiful gravesite of memorial brick pavers and guarded by two machine guns.  Graves was selected as the national "Known" soldier.  He died and was buried in France during World War I. His body was later disinterred and moved to the United States, selected to be buried at Arlington Cemetery alongside the Unknown Soldier. His mother later had his body brought home to Rome where he was buried in the family plot, and finally was reinterred by the American Legion at Myrtle Hill Cemetery. His grave is the center of the New Veterans Walkway.