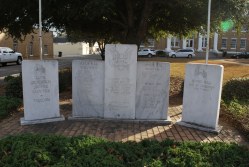 Photos courtesy of Lamar Veatch
The memorial consists of three standing stone tablets inscribed “Dedicated to those brave men of Candler County who paid the supreme sacrifice in defense of their country.”  It is possibly the only marker in Georgia to recognize the Nicaraguan Conflict of 1927.  The site also contains a separate Candler County Veterans Memorial inscribed “Dedicated to all the residents of the county who served in the armed forces of our country during World War I, World War II and the Korean War and in memory of those who died in service.”