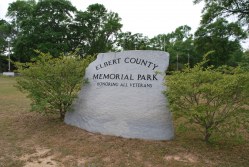 From 1923 to 1984, this 1.8 acre tract was managed by the Service Star Legion of Elbert County.  It was originally donated in memory of LT Edmund Brewer Tate, III, killed in action in the Argonne forest battle on Oct. 12, 1918.   Since 1984, the renamed ‘Memorial Park” is managed by Elbert County.  It contains multiple markers honoring Elbert County dead from all U.S. wars.