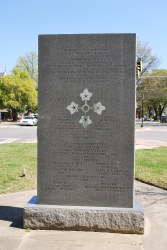 The "Ivy Division" is a unit with a proud history dating to World War I.  In December 1941, the 4th was the first unit assigned to Camp (now Fort) Gordon after its move to Augusta from DeKalb County.  The monument lists the many battles in which the soldiers of the 4th distinguished themselves, including:

The 4th was the first unit of US. Troops to land on Utah Beach Normandy France 6 June 1944