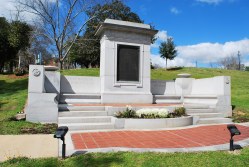 Erected in 1922, the monument was beautifully restored in 2015 under the direction of Middle Georgia State University President Christopher Blake.  It honors soldiers from Macon who served primarily in the 42nd Rainbow Division, and depicts the cities in France where the 42nd saw action.  It is inscribed in Latin with a phrase translated as “It is sweet and glorious to die for one’s country.”

“Erected by the Ladies Auxiliary 151 Machine Gun Bt., assisted by the Men of the Battalion - 1922”

”in memory of the 51st Machine Gun Battalion”