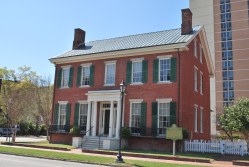 http://www.wilsonboyhoodhome.org/
Photos courtesy of Lamar Veatch
Woodrow Wilson, later to become 27th President of the United States, lived in this Manse of the First Presbyterian Church of which his father, Dr. Joseph R. Wilson, was pastor from 1858 to 1870. Wilson was born in Staunton, Va., in 1856 and he later attended the University of Virginia Law School, graduating in 1881 having previously graduated from Princeton University. He practiced law in Atlanta and in 1885 was married in the Manse of the Savannah Independent Presbyterian Church to Ellen Louise Axson of Rome, Ga. He later studied political science at Johns Hopkins and taught at Bryn Mawr, Johns Hopkins and Wesleyan University in MIddletown, Conn. He was called to Princeton as professor of jurisprudence and political economy in 1890 and became President of Princeton in 1902. He was elected Governor of New Jersey in 1910 and President of the United States in 1912, being re-elected in 1916. He led the country to victory in the First World War and personally attended the Paris Peace Conference where he fathered the ill-starred League of Nations. He became ill in 1919 and died in 1924.  Source: David Seibert