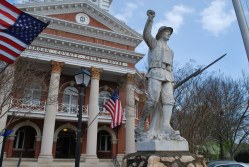 On the grounds of the Morgan County Courthouse, erected by the local Daughters of the American Revolution in 1930, the statue of a soldier is inscribed “The Boys from Morgan County who fought in the World War.”  It is rare in that it is one of the few stone reproductions of the original Spirit of the American Doughboy statue which stands in Nashville, Ga.  Most of the many copies around the nation are in copper.