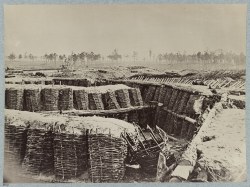 Petersburg National Battlefield commemorates the nine and one-half -month campaign and siege and defense of Petersburg, Virginia, in 1864 and 1865. As the apex of trench warfare in the Civil War these fields are key in understanding the evolution that led to the battlefields of World War 1 in Europe. The park also manages training trenches used by the 80th Division in 1917-1918 while stationed at Camp Lee. The historic photograph shows trenches dug during the Civil War. Courtesy of the Library of Congress.