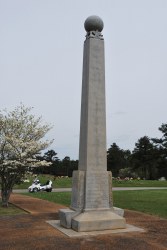 Unveiled May 21, 1919,  this soldiers monument was erected in Fairburn (Campbell County), in the middle of West Broad Street, to honor those who had died in World War I. The monument was moved to the Holly Hill Memorial Park Cemetery in 1967.

In 1931, Campbell County was absorbed into Douglas and Fulton Counties.  Fairburn became part of Fulton County.