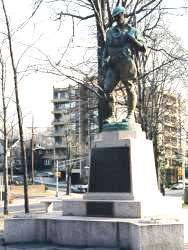 This monument commemorates the soldiers from Cliffside Park, NJ who served in World War I.  It was dedicated on Decoration Day 1929.

The bronze sculpture depicts a WWI soldier leaning on his left foot. He is wearing his uniform, ragged on both arms, a helmet and carrying a rifle on his left shoulder. His left hand is holding the rife strap, his right hand is hooked to the ammunition belt hanging around his hips. He is wearing a gas mask on his chest & a canteen on his right hip.

On February 12, 1950, the monument was rededicated and a new plaque was added to include the names of the soldiers who gave their lives in WWII. The new plaque, made of polished labradorite, covers the original inscription on the stone base.