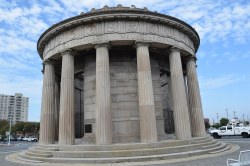 In 1907, the city of Atlantic City joined with the famous New York architecture firm of Carrere & Hastings in a plan for a civic monument.  Delayed by US involvement in World War I, in 1919, the city decided the monument should be built in honor and memory of city residents who served in the war.

Designed in the Greek tholos form, the circular structure reaches 124’ in diameter and features 16 Doric columns made of Indiana limestone.  Paving between the columns is bluestone & slate.  The monument’s frieze depicts the name of battles in which Atlantic City men fought.

There are four medallions (Army, Navy, Marines & Aviation) that alternate around the circumference of the frieze.  The battles in which Atlantic City men fought are inscribed upon the architrave.

In the interior of the temple is a nine-foot bronze statue, “Liberty in Distress,” designed by Philadelphia sculptor, Frederick MacMonnies.  This sculpture was installed in July 1929.  It depicts victory over the enemy, but at the same time emphasizes the sorrows & sufferings of war.  It was mounted on a green Vermont marble pedestal.

The monument was dedicated in 1923.