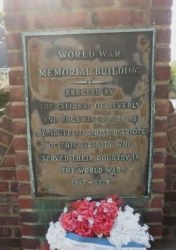 Beverly's memorial library is dedicated to its local citizens who served in World War I.  A plaque reads, "World War Memorial Building / Erected by the citizens of Beverly and Edgewater Park as a tribute to those patriots of this vicinity who served their country in the World War / 1917-1918."