Site of Signing of US WWI Peace Treaty - Raritan 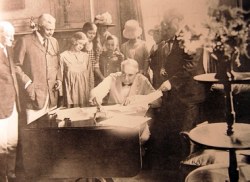 The following is an account of the signing of the US WWI Peace Treaty published in the New York Times issue of May 27, 1984:

"Although the other Allies accepted the Treaty of Versailles, a vicious, partisan battle over its adoption erupted in the United States.  ... Formal peace did not come for another two years: July 2, 1921. The place the war ended was in rural Somerset County.

The US resolution contained some of the provisions of the Treaty of Versailles, but not membership in the League of Nations.

As the debate in Congress was ending, President Warren Harding left to spend a relaxing Fourth of July weekend at the picturesque country home of Senator Joseph S. Frelinghuysen in Somerville, NJ.

The President was accompanied by his wife and a group of cronies from the Senate and the House. The Presidential party arrived on Friday evening, July 1, after taking the Baltimore & Ohio Railroad from Washington to Bound Brook.

The following day, a White House courier arrived with the resolution that had just been adopted by Congress, and reporters described the ensuing events with the sort of colorful journalistic detail that characterized newspaper reporting in those days.

President Harding, who had been playing golf at the Somerset Hills Country Club, returned to the Frelinghuysen home in an automobile. He was wearing ''a Palm Beach suit, white shoes, white socks with black clocks, a white shirt buttoned by removable gold studs and a green and red bow tie.''

He met the White House courier on the front porch, where he read through the documents. The President then entered through the front door and sat at a table.

A reporter asked Senator Frelinghuysen what he called the room.

A group of Somerset County officials, including Sherrif Bogart Conkling, had brought along a feathery quill pen for the President to use, but he instead took a ''new steel pen in an ordinary wooden holder'' from Senator Frelinghuysen.

In silence, except for the clicking of cameras, the President signed the resolution.

''That's all,'' he said, in what must be one of the most unmemorable lines ever uttered in a historic moment.

At that point, a large drop of ink fell from the pen to the page, obscuring part of Mr. Harding's signature. An aide applied a blotter, and the document was placed in a leather pouch to be returned to Washington.

After a few moments of conversation, the President and his party departed for some more golf, this time at the Raritan Valley Country Club.

Nobody is quite sure how it got there, but the desk on which President Harding signed the resolution is tucked away in a small room in the concrete and glass library on the Rutgers-Newark campus. There is no plaque or marker on it, and it is used principally as a conference table for librarians."

Today, a small plaque commemorates the location of the former Senator Joseph S. Frelinghuysen home in Somerville, NJ.  It is located at the entrance to the Somerville Circle Shopping Center.