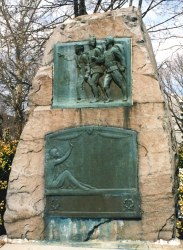 Located at a major road intersection in Edgewater, Bergen County, the monument consists of two bronze relief plaques mounted to the face of a quarry-faced, stone slab. The plaques were designed by sculptor Ettore Cadorin.

The upper plaque depicts a sailor, soldier, & marine, each dressed in uniform, standing side by side with their arms interlinked. The sailor has a raised right arm and points to a depiction of a ship at sea at the left side of the plaque. The figure at right holds a rifle by its barrel in his lowered left hand.

The lower plaque depicts a seated allegorical female figure, dressed in flowing robes who raises her right arm while holding a flagpole with unfurled flag with her left hand. To the right of the figure is a list of names.

The monument, originally erected to honor veterans of the Great War, now has plaques commemorating service in World War II, Korea and Vietnam, as well.