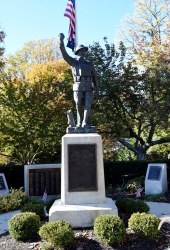 This copper cast sculpture, set upon a pink Maine granite base with beveled corners, depicts a World War I infantryman advancing through the stumps and barbed wire of "No Man's Land."  He holds a rifle in his left hand & a grenade in his raised right hand.

The monument was dedicated on August 16, 1924, in honor of Fair Haven residents who served in WWI. The base contains a bronze plaque with a Fair Haven World War I honor roll.  It cost approximately $1,000 with an undisclosed sum for the base. The Memorial Park Committee financed it by holding several events including a boxing tournament feature Gene Tunney.

In the late 1960s, vandals stole the rifle and broke the figure’s left hand.  In 1995, the sculpture was refurbished.