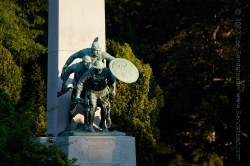 Montclair's landmark World War I memorial in Edgemont Park consists of a tall granite obelisk. The shaft is surmounted by a bronze female figure of Liberty. She stands on a globe which is upheld by eagles. Her right arm is raised straight in the air; her left arm is held out in blessing.

At the base of the obelisk stands a bronze figure grouping. At the front of the group is a WWI soldier, dressed in uniform and carrying a rifle. Behind him is a figure of a sailor.
Columbia, a full-length female figure, stands behind and above the two male figures. She wears a helmet and holds a round shield in her left hand, towering over the soldier & sailor.
The bronze grouping stands on a stepped base surrounded by a flagstone platform.

This memorial was funded by popular subscription; $85,000 was raised. The municipality contributed an additional $6,000 to build two small bridges and to grade the island in the park on which the memorial stands.