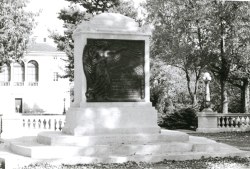 This monument consists of an oblong granite base and a vertical granite slab adorned on the front with a bronze relief of a female figure representing Winged Victory.  She stands with her leg, hand & wing extended over the heads of a group of marching World War I soldiers.  She holds a palm frond in her right hand.  She is barefoot & dressed in a sleeveless, ankle-length robe with armor on her upper torso.

The monument was installed by the city to honor the Morristown men who died in WWI.  It was dedicated in 1928, on the 10th anniversary of the signing of the Armistice.  The monument & its setting were designed by John R. Brinley & John S. Holbrook, civil engineers of Morristown.