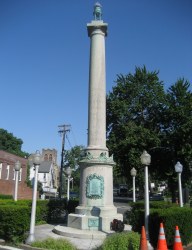 This WWI monument was designed by the artist Edgar Williams, brother of noted poet William Carlos Williams, who practiced medicine in his home across the street from the monument's location.  Working with the borough's War Chest Committee, Edgar Williams designed this elegant cast granite column for the intersection of Chestnut Street and Park & Passaic Avenues.  At its dedication on Memorial Day 1920, Edgar Williams explained the concept behind the monument:   "The monument has a generally vertical mass chosen to indicate, as an old French axiom says, 'a finger pointed to Heaven'… the lower base will contain the records of those who died in the war ... on either side of the tablet are reversed torches, the symbol of lives passed from this earth. Intertwined about the torches are laurel branches indicating glory and honor ... the shaft bears the names of the major engagements in which our Rutherford boys took part. At the very top is a tripod from which a flaming light springs. The tripod is a symbol of sacrifice and the flame symbolizes the light which our boys helped give the world; light always pointing upward as the memory of these men who died for their convictions shall always be."  Narrative adapted from "Rutherford: A Brief History," William Neumann, 2008.  Photos courtesy of:  Billy Neumann. Plaque detail - Smithsonian Institution Research Information System (SIRIS)