Spirit of the American Doughboy - Secaucus 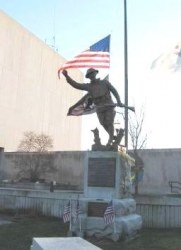 The monument was erected in memory of Joseph Hassendorder, who made the supreme sacrifice, and in honor of the boys of Secaucus who served their country in the World War.