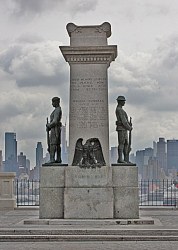 Two full-length bronze figures flank a square granite column. The figure on the left is a WWI sailor. He is dressed in uniform and wears a sailors cap. He holds a rifle in front of him with both hands placed on the barrel of the gun. The butt of the gun rests on the ground in front of him. The figure on the right is a WWI doughboy. He also wears a uniform and helmet and holds a gun in the same position.  Both figures stand with their backs to the monument column on granite bases which rest flush against the column.

The capitol of the column is decorated with bas-relief elements.  A bronze eagle, perched on an olive branch with wings outspread, is centered on the front & back faces of the column.

This memorial is dedicated for her 21 sons who made the supreme sacrifice in WWI.