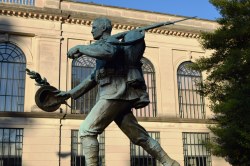 This World War I memorial of a bronze doughboy is depicted striding forward with his rifle held over his left shoulder and a large pack on his back.  In his extended right hand, he carries his helmet and an olive branch.

The memorial was erected in 1924 under the sponsorship of the local chapter of the Daughters of the American Revolution, who raised $10,000 in contributions from the community.

The figure was designed by Robert Tait McKenzie of Philadelphia; the Indiana limestone base by Paul P. Cret, head of the Department of Architecture at the University of Pennsylvania.