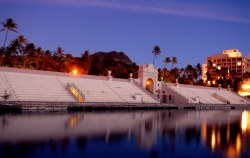 The Waikiki Natatorium War Memorial is a war memorial in Honolulu, Hawaii, built in the form of an ocean water public swimming pool. The natatorium was built as a living memorial dedicated to "the men and women who served during the great war" (now known as World War I). It is the only official memorial honoring World War I in the State of Hawaii.  Located on the shore west of Kapiʻolani Park and completed in 1927, the natatorium was built in the Hawaiian Beaux-Arts architectural style. The entrance to the memorial includes an arch featuring four stone eagles typical of this style.
Inside the memorial is a 100 meter by 40 meter salt water swimming pool. In the opening ceremonies on August 24, 1927, the local Olympic gold medal holder Duke Kahanamoku made the first swim (it was his birthday). In the following swim meet, world record holder Johnny Weissmuller won the 100, 400 and 800 meter events, and Buster Crabbe (also local) won the 1500 meters.
After the attack on Pearl Harbor in 1941, the natatorium was taken over by the U.S. Army and used for training during World War II. In 1949 it was refurbished and turned over to the City and County of Honolulu on July 1, 1949. Its condition deteriorated, and was officially closed in 1963, but continued to be used.  It was added to the National Register of Historic Places listings in Oahu on August 11, 1980 as site 80001283.

Detecting your location...
No information to be displayed !
Other