Spirit of the American Doughboy - Belmar 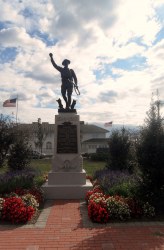 This sculpture is one of many casts made from EM Viquesney's doughboy design. Monuments using this design are scattered around NJ & the United States.

The sculpture, set upon a granite base, depicts a World War I infantryman advancing through the stumps and barbed wire of "No Man's Land."  He holds a rifle in his left hand & a grenade in his raised right hand.

The monument was erected in honor and memory of those from Belmar who served in World War I.

The doughboy sculpture was damaged by vandals in 2017.

Detecting your location...
No information to be displayed !
Copper
Granite
4 ft
4 ft
Citizens of Belmar
47260066