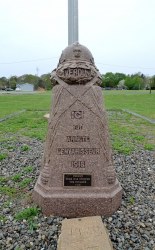 In 1900, John Wanamaker of Wanamaker Department Store in Philadelphia, came to Island Heights, NJ to open a camp, "the Barracks," for children attending the John Wanamaker Commercial Institutes in Philadelphia and New York. A paternal employer, Wanamaker was adamant about well-rounded education for his employees. "Thinking, trying, toiling and trusting God, is all of my biography," he wrote once in response to a request for a sketch of his life, and so in finding Island Heights religiously oriented, easily accessible by rail from both stores, and with the availability of land for camping and marching, he established his quasi-military encampment in the northeastern corner of the Borough.

The young employees came in weekly shifts until child labor was deemed unlawful in 1941. People came from miles around to watch the drilling and hear the Drum & Bugle Corps and the Military Band. The students were drilled like a National Guard camp, but with time for field sports and swimming.

In later years, full companies from Wanamaker's went on to fight in foreign wars, and a granite statue on the Borough grounds stands as a tribute to their participation at the Battle of Verdun in France.