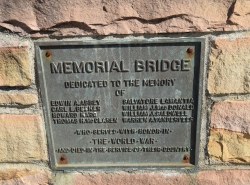 Mount Holly's WWI memorial has always been a bridge crossing the North Branch of the Rancocas Creek west of High Street in the downtown.  Originally, an honor roll plaque was placed on the parapet of the existing bridge in the early 1920s.

Today's present bridge appears to date from the mid-20th century.  The original plaque has been mounted east of the north parapets, commemorating Mount Holly residents who fought in WWI.