Planting the Standard of Democracy in Honor of Newark's Soldiers - Newark 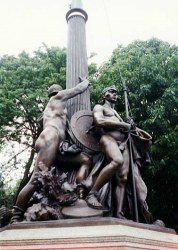 This sculpture, placed in Lincoln Park in downtown Newark, was designed by Charles Henry Niehaus, described as one of the foremost monumental sculptors of his generation.

In 1920, Niehaus received  the commission for this Newark monument. At the base of a tall slender column is a bronze sculpture depicting four soldiers planting a flag. One figure holds the flag about to be unfurled, two figures hold the flagpole in place, and the fourth figure secures the pole at its base. The column is topped by an American eagle. The sculptures rest atop an octagonal base adorned with four reliefs representing Patriotism, Sacrifice, Law and Order, and Fraternity. The base of the sculpture is surrounded by a metal fence.