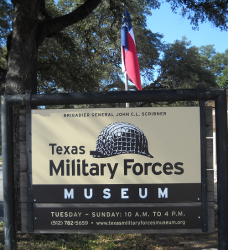 This email address is being protected from spambots. You need JavaScript enabled to view it.
http://www.texasmilitaryforcesmuseum.org

Texas Military Forces Museum explores the history of the Lone Star State’s militia and volunteer forces from 1823 to 1903 when the Congress created the National Guard. From 1903 to the present the museum tells the story of the Texas Army and Air National Guard, as well as the Texas State Guard, in both peacetime and wartime. The museum displays dozens of tanks, armored personnel carriers, self-propelled guns, trucks, jeeps, helicopters, jet fighters, observation aircraft and towed artillery pieces. Permanent exhibits utilize uniforms, weapons, equipment, personal items, film, music, photographs, battle dioramas and realistic full-scale environments to tell the story of the Texas Military Forces from the Texas Revolution to current the Global War on Terror. The museum has extensive library and archival collections focused on Texas Military history – including the WWI service cards for every Texan who served and the story of the 36th Infantry Division.

Detecting your location...
No information to be displayed !
Museum is open to the public: Tuesday to Sunday 10 am to 4 pm

Museum staff are available: Monday to Friday 7 am to 5 pm