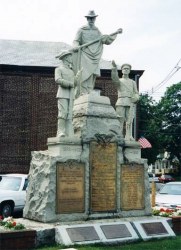 This Veterans Memorial was a gift to the City from the Red Bank Volunteer Fire Department. It commemorates those who served in the Civil War, the Spanish-American War & World War I, and was dedicated on Memorial Day 1926 before a crowd of 300 people.  The keynote address was given by Commander Walter E. Decker of the Brooklyn Navy Yard.

The three full-length figures of soldiers stand atop a tiered granite base.  In the center, on the highest level of the base, is a portrait of Henry M. Nevius.  He wears a Civil War uniform including a long coat and hat. In his hands, he holds an American flag which is draped over a flagpole.

On his right is a figure of an unknown Spanish-American War soldier.  He is dressed in uniform and holds a rifle in his right hand. The butt of the gun rests on the ground.  His left hand is held up toward the center figure.

The third figure stands on a pedestal to Nevius' left at the same height as the Spanish-American War figure. This is a portrait of Major Peter P. Rafferty.  He wears a World War I uniform and holds the barrel of a rifle in his left hand.  The butt of the gun rests on the ground.  Nevius & Rafferty were Red Bank veterans.

Three bronze plaques are attached to the front of the monument, each with a bas-relief eagle at the top.