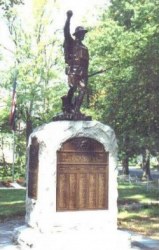 The monument was dedicated on September 3, 1923. The base contains a WWI honor roll plaque on the front, & an honor roll for subsequent conflicts on other sides.