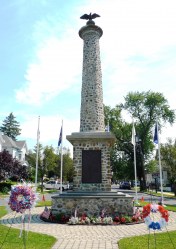 Wallington's monument was created by local citizens as an expression of gratitude, respect & remembrance to those who served in the "Great War."

In addition, an honor roll, framing the names of all the men in service, is still displayed in the council chamber of the municipal building.