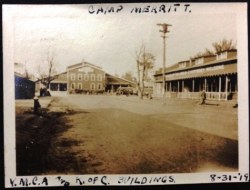 With the 1917 US entry into World War I, an embarkation camp was needed near Hoboken, NJ where troops could assemble for ship transport to France.  Brigadier General William Wright selected a site centered on the intersection of Grant Avenue & Knickerbocker Road, occupying 770 acres in the boroughs of Dumont, Cresskill, Haworth, Demarest, Bergenfield & Tenafly.  More than one million servicemen passed through the site.  578,566 went overseas and 509,515 returned.  About half of the troops left from Alpine Landing by ferry, and half left by train for Hoboken where they boarded ships for overseas.

The largest embarkation camp in the US during WWI, a total of 1,302 buildings were erected to train 50,000 men at a time. With the end of the war, the camp was closed and its buildings removed.  Today, the area is residential.