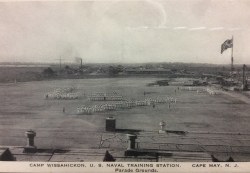 Camp Wissahickon was a WWI Naval Base located at Sewell’s Point, NJ.  A strategic location, as it guards the mouth of the Delaware River – the only navigable waterway to the Philadelphia Naval Shipyard and associated defense industries. During the war, it provided operational support to minesweepers and submarine chasers. A submarine base was located across Cape May Harbor. The base also included a Naval Air Station, including a dirigible hangar built in 1918.

After the end of the war, the Navy & Coast Guard jointly used the base from 1920-25, when the Coast Guard took over.

A year after it was built, a suspicious fire destroyed the base while base personnel were participating in a nearby parade. The fire, suspected as arson, erupted simultaneously in four places. Personnel lost all possessions, and $200,000 worth of naval equipment was destroyed. The base was rebuilt, although soldiers had to wear donated civilian clothes for weeks until new uniforms arrived.

Today, only the commanding officers’ quarters remain, but the buildings have been moved to Columbia Avenue & Stockton Place.