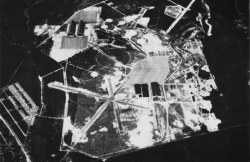 A portion of the land that later became the Naval Air Engineering Station Lakehurst was developed in 1916 as a munitions testing site for the Imperial Russian Army. When the United States became involved in World War I, the United States Government acquired the land and named it "Camp Kendrick." It was used as a troop training base, and was, for a short time, the home of the 1st Gas Regiment, a chemical weapons unit.