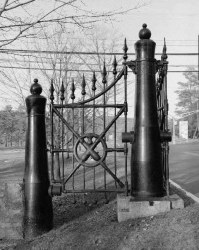 PIcatinny Arsenal was founded in 1880 as the Picatinny Powder Depot. It is located in a valley between two sets of hills to shield the surrounding countryside from any accidental explosions. Gunpowder was manufactured until after World War I, at which time the facility also began producing heavy munitions and grew more involved in research & development activities. Testing and control laboratories were established during the WWI years, as well as the beginning of a small experimental plant for the design and development of artillery ammunition.

The arsenal continued to function as a research & development facility in the years between the two world wars. Major accomplishments of this period included better methods for storing smokeless powder, improved processing of cyclonite (more commonly called RDX), and the discovery of a new explosive, then known as haleite but later known as Ednatol.

Picatinny maintained as much as 49 miles of its own narrow and standard gauge Picatinny Arsenal Railroad to service its many transportation needs (fuel, raw materials, ammunition, etc.).

Today, Picatinny Arsenal is the Joint Center of Excellence for Guns & Ammunition, providing products to all branches of the US military. More than 6,000 personnel lead in the research, development, acquisition and life-cycle management of advanced conventional weapon systems and ammunition.