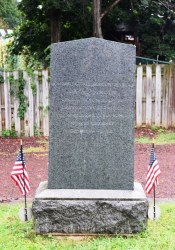 It was in 1918, at 7:40pm when the first of a series of explosions spanning two days went off in Building 6-1-1 of the TA Gillespie Shell Loading Plant in rural Morgan, NJ.  The building contained equipment which melted and poured Amatol - a Trinitrotoluol (TNT)-based explosive - into 155mm artillery shells for shipment to France for use in WWI.

The remains of 14-18 unfortunate souls, who were so badly disintegrated by the blasts, were buried in a mass grave in nearby Ernst Memorial Cemetery (Parlin, NJ).  The task of trying to identify the unidentifiable and to witness & certify each burial fell to South Amboy resident, Michael Nagel, who later became the Commander of American Legion Luke A. Lovely Post #62.