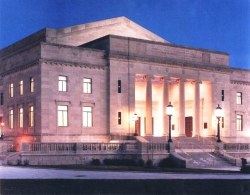 The Trenton War Memorial was built in 1930 and was added to the National Register of Historic Places in 1986.  It was designed by Louis S. Kaplan, who as a young architect won the design competition for a Trenton memorial to its dead from World War I.  Kaplan then supervised the building of the War Memorial, and after its dedication became the leading architect in Trenton until the early 1960s.

Built as a concert hall, it fell into disrepair before being restored by the State of NJ in the 1990s.  It was rededicated in 1999.  The 1,807-seat theater at the War Memorial was renamed the Patriots Theater in 2001.