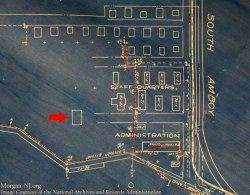 The TA Gillespie Company Shell Loading Plant produced & shipped ammunition for overseas military action during World War I. It was one of the largest facilities of its kind at the time.

The devastation forced reconstruction of adjacent towns of South Amboy & Sayreville. According to a 1919 government report, the explosion destroyed enough ammunition to supply the Western Front for six months.

The plant had begun production just three months earlier, and the war itself ended just one month after the explosion.

The totality of the event ranked as one of the largest man-made, non-nuclear explosions in history. The strongest individual blast broke windows as far away as Manhattan & Asbury Park, more than 25 miles distant.

After the war, the company was renamed Gillespie Motor Company in 1919, merged to form Gillespie-Eden Corporation in 1920, and disappeared sometime after 1923.