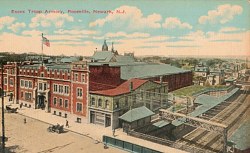 Built in 1910, the Roseville Avenue Armory was home to the elite horsemen of Essex Troop, which joined the National Guard in 1893 as Cavalry Company A.  The troop trained & held mounted drills at the site.

The Essex Troop was called to active duty in 1917 for service in World War I.  They served in France not as cavarly, but as military police & artillery.

Today, the old Essex Troop lineage is carried on in the 102nd Armored Regiment.