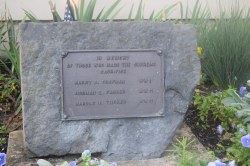 The Crosswicks monument was dedicated on Veterans’ Day 1922 in a ceremony that also included the laying of the cornerstone of the Crosswicks Community House.

Originally, the monument plaque contained only the name of Harry J. Chapman, the one Crosswicks resident killed in action in World War I.  The plaque was apparently later recast to add the names of two village residents killed during World War II.