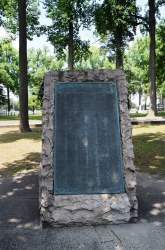 Vineland's World War I memorial, located in Landis Park, consists of an upright slab of quarry-faced granite to which is mounted a bronze plaque containing the names of all those from Vineland who served in the war.

Landis Park, named for Charles Landis, the founder of Vineland, was developed as the city's memorial park with a series of monuments honoring those who served in each of the country's major foreign conflicts. The WWI monument is the first one encounters when entering the main drive off Park Avenue.