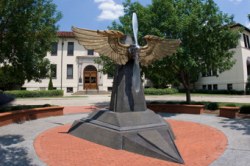 "Military forces arrived in 1540 with DeSoto at Indian village of Towassa. Here in 1910, the Wright brothers established the nation's first civilian flying school and made first recorded night flights. A repair and engine depot was established in 1918 for airplanes used for training in World War I. After the war, the 22nd Observation Squadron and 4th Photo Section assigned to the post made aerial photos of the Tennessee Valley, delivered first airmail to Montgomery, and in 1929 airdropped supplies for flood relief." -Alabama Historical Association marker, 1993.