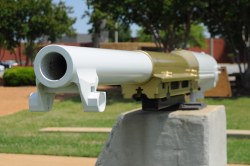 This 1916 gun was used by the American Expeditionary Forces in World War I as part of a horse drawn caisson. During the war, American forces were loaned guns, planes, and other equipment from the French Arsenal. This gun was moved to Veterans Memorial Park in 1993 when Capitol Park was renovated. -Marker