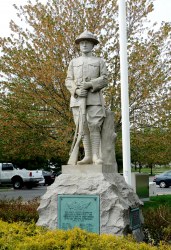 This World War I monument consists of an approx. 5' tall sculpture placed upon a square base about 5' high.  A plaque with raised lettering on the front of the base indicates this was erected to honor the men of Eatontown who served in the war.

The sculpture itself depicts a WWI doughboy at parade rest with his left foot forward.  The soldier clasps the barrel of a rifle with both hands. The butt of the rifle rests on the ground near his right foot.  He wears a wide-brimmed hat, a belted jacket and his pants are tucked into wrappings that cover both calves. There is a tree trunk behind his left leg.

The monument was purchased from LL Manning & Son, a Plainfield, NJ monument company.