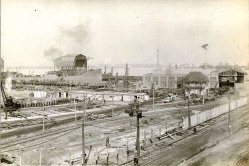 The Pennsylvania Shipbuilding Company (also known as Pusey and Jones Shipyard) was established during World War I to provide tankers and cargo ships for the United States Shipping Board for use in the war effort. Known briefly as Pennsylvania Shipbuilding Company, after a few months its name changed to Pusey and Jones, reflecting its ownership by the well-known Wilmington, DE shipbuilder.

Although only in operation a little more than a year, the yard built six tankers and 14 cargo ships. Many of the ships were named to reflect their military use: War Serpent, War Horse, and War Priest; or to commemorate prominent individuals in American history: Daniel Webster, John Adams, Ethan Allen, and Patrick Henry; or Revolutionary War battles: Chestnut Hill and Brandywine.

To house the hundreds of shipyard workers, the company constructed a nearby company town. Originally known as Noreg, it now comprises the major portion of the Borough of Brooklawn in Camden County.

The photographic and manuscript archives for Pusey and Jones are available in the collections of the Hagley Museum & Library, Wilmington, DE.

Photos courtesy of: The Hagley Library, Audiovisual Collections, Wilmington, DE
All images are c.1917 & include the launching of the oil tanker, Desdemona.